The Art of Seduction in the Etruscan World- (…) It seems that Etruscan women were “bellissime da vedere”: very beautiful to look at, as celebrated by Greek and Roman authors who also severely judged them for being too free and extremely emancipated for their times http://www.chiarastuscany.com/2019/03/27/etruscans-the-worship-of-beauty/)

Great care for appearances was not only a woman’s prerogative. Etruscan men and women used to spend a great deal of time taking care of their body by regularly practicing sports and even going to special places that we could identify with modern beauty salons. The Greek Historian Teopompo (IV BC) in his writing, talks about “specialized shops with artisans similar to barbers who, with no shame for anyone passing by, perform any kind of procedure for men as well as women, like epilation with pitch or with tweezers”. It is interesting to report that the famous expert in Etruscan studies, Massimo Pallottino, translated, in his works, the word “ergasteria”(lit. shops), used by Teopompo,  with “beauty salons”.

Moreover, paintings discovered in numerous tombs, such as Tomba degli Scudi, in Tarquinia, of men with refined hair styles and frequent images of unnatural blond hair for men as well as women, in contrast with dark eyebrows, as you would expect for the local population, most likely originating from Anatolia.

Women’s hairstyle were  sophisticated and particularly elaborated, as shown in the many images found in paintings and scultpures.

Complicated multiple long braids were either held by elegant hair clips or gathered around the head to form a sort of crown. Based on Greek and Roman writings and findings, scholars have hypothesized, that Etruscans used to dye hair probably by using a solution made out of ash and water , called “liscivia”, renowned for its whitening properties, regularly used for personal hygiene, for washing body and hair, a sort of ancestor of modern shampoo and body wash. In Plinio’s Naturalis Historia, we can read about Gauls’  use of “sapo” (soap) as an invention to dye hair (finally obtaining a reddish colour) and how it was available in two versions: thick liquid and solid. 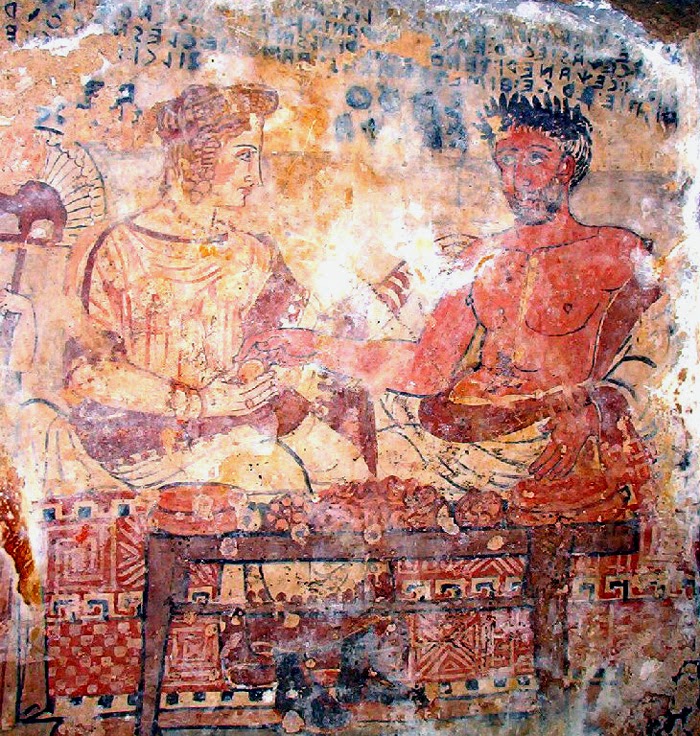 Etruscans also were undisputed master perfumers and excellent cosmetologists. The cosmetics they produced were oils and ointments, while make-up products were mainly imported from both Asia and Egypt and partly from Greece.

The art of makeup was characterized by red colored lips, bright eye shadows, black eye-liner and perfect skin thanks to creams and preparations similar to our modern foundation.

The weapons of female seduction were ointments, perfumes, powders for eyes and cheeks. Eye shadows were colored powders mixed with fatty substances (from animal or vegetable sources) to which mineral or vegetable dyes were added. It seems that the most sought after colors were ash pink obtained from rose petals and yellow from saffron. The bright red on the lips, that can be seen on the dancer in the Tomba dei Giocolieri in Tarquinia, was sometimes obtained with a powder called “milton”, other times using mulberries extract (more di gelso), abundant in ancient Etruria.

In a tomb near Orvieto two well preserved balsamari (ointment containers) were found and the content analyzed. One contained a sort of foundation for the face, composed of clay, colored saturated ocher soil and talc mixed with a small amount of calendula infused oil to obtain a luminescent effect. In the second container there was a smoky black preparation made up from charcoal also used as eye-liner and to emphasize eyelashes and eyebrows.

A type of face powder was also made by using a white preparation made from spelled powder from Chiusi  “far clusinum”.

Etruscans were renowned for their ability in making ointments and perfumes. Remaining found in jars and containers brought back to life in a tomb near Chiusi, were carefully analyzed by researchers. They established that the contents consisted of a mixture of lipids and resins. “The natural resins were Pine Resin, from Pinaceae, and Mastic Resin, from the Anacardiaceae trees. The lipid (fat) part was a vegetable oil, most likely from Moringa, used by the Egyptians and Greeks to produce ointments and perfumes.

The Moringa Oil, also called mirabolano oil, (miracle oil) as mentioned by Pliny the Elder (23 – 79 AD), comes from a tree native of Sudan and Egypt and it is not found in Italy .  Researchers concluded that it was imported into Etruria. Interestingly enough, the oil extracted from this plant is nowadays widely used in modern cosmetology due to its  many properties  (Antioxidant – Anti-inflammatory –Anti-aging –Anti-microbial –and Disinfectant) . Moreover it is a natural preservative and  because it is able to absorb the aroma of essential oils and other fragrant compounds like herbs, nuts, seeds, spices … it is  the perfect perfume base)

Recently Moringa oil is produced in small quantities in Southern Italy as part of an experimental botanical project.

Etruscans were the greatest importers of essences and perfumes: Cyprus, Nard, Saffron, Cinnamon, Myrrh and Aloe, to which were added Henna, Behen and Frankincense. From the 5th century B.C. Sandalwood, Nutmeg, and Benzoin appeared as well.

The perfumes of animal origin, from beaver, and zibet, were also used as aphrodisiacs.

Great sailors, they discovered and introduced in the Mediterranean countries the Ambra Grigia- Grey Amber, which became the most sought after essence and the most expensive.

The Etruscans, however, also appreciated the typical aromas of their territory, such as Juniper, Rosemary, Sage, Lavander and Myrtle.  Bergamot, Mint and Pine too were very popular. 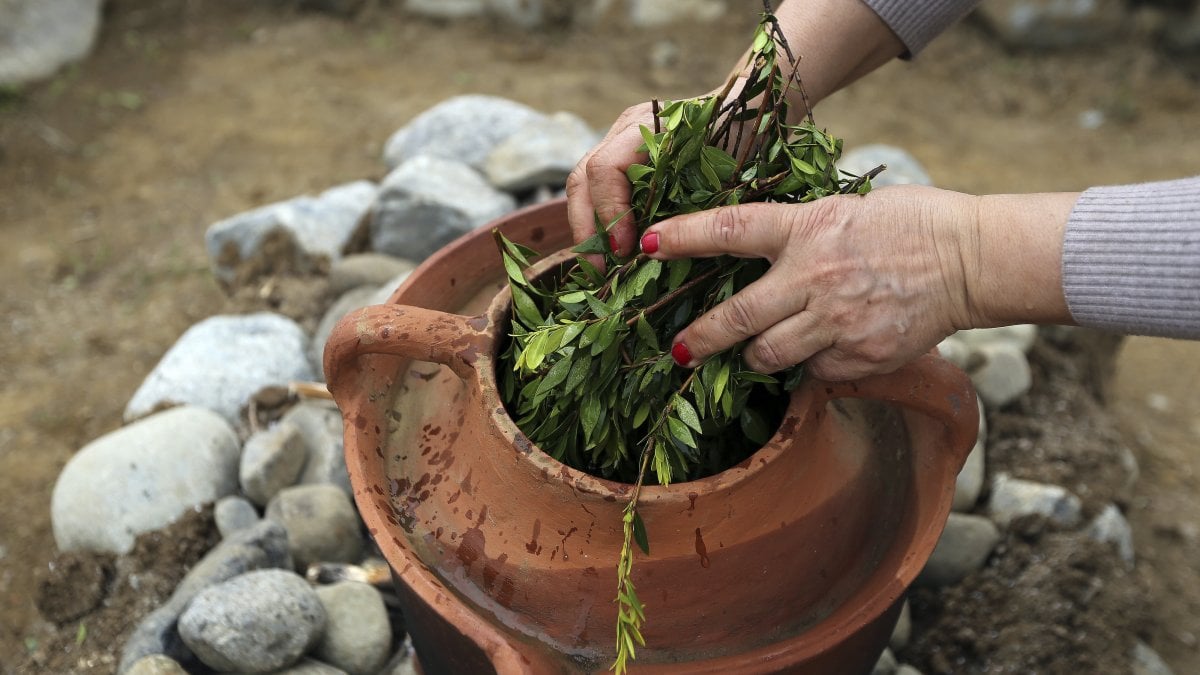 Combinations such as Pinus and Damascena Rose were documented since Mesopotamia times: a well balanced formula with Pinus as a stabilizer and Rose as a stable element.  Essences were mixed with a base of water and olive oil.

Rose, Sage and Coriander was another popular combination.

Body Oils and Ointments for every occasion

Not only  did men regularly use body oils before and after sports, they also  had special a tool , called strigile, to remove any eccess; women too widely used oils for body, face and hair and had special scented ones made for special celebrations or weddings. 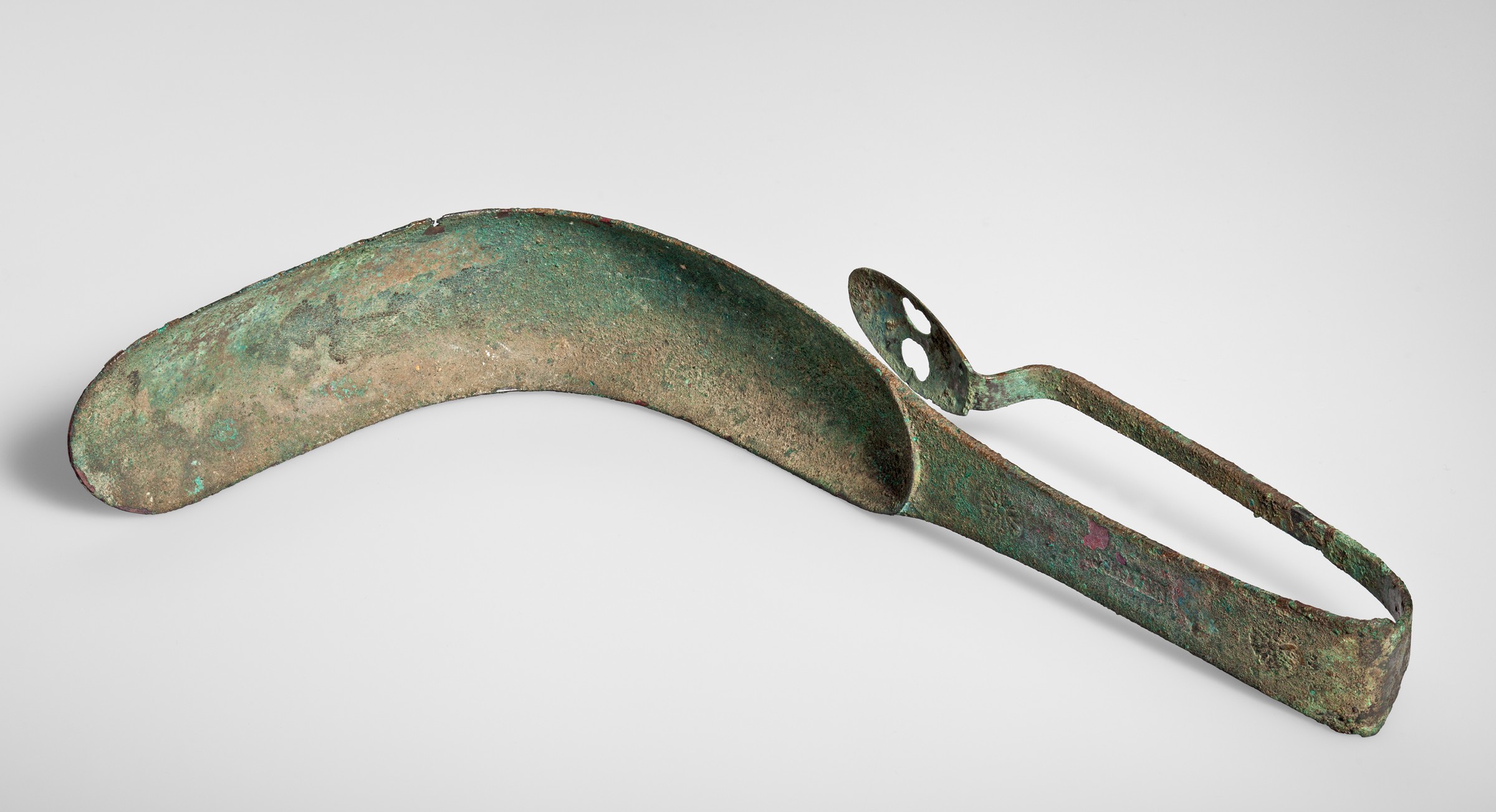 It was not uncommon to have different scented oils or ointments used at once but each one for a different part of the body. It would have been an Egyptian ointment for feet and legs,

Palm Oil  for cheeks and nipples, Bergamot oil for an arm and Meliloto for the other, Marjoram for hair and eyebrows, Thyme for neck and knees.

” The Etruscan woman , wearing her elaborate make-up, perfumed  and dressed with long robes, crowned with laurel and jewels, leave the domestic walls to take part, alongside her man, to the political and social life of the city. A unique thing for the ancient times.” What a threat they truly must have seemed, to other “more conservative” cultures of the ancient world!