Etruscans & the Worship of Beauty: It seems that Etruscan women were “bellissime da vedere”: very beautiful to look at, as celebrated by Greek and Roman authors who also severely judged them for being too free and extremely emancipated for their times. They also were highly knowledgeable in the field of herbal medicine and cosmetology.

For these many reasons, they have been object of malevolent gossip and backbiting by nearby populations that did not approve equal rights that men and women had within Etruscan society as well as the independence that the Etruscan woman enjoyed in everyday life.

The worship of Beauty: being well and being beautiful

The constant research of beauty was everywhere: from the choice of the location where they decided to place a settlement, to the great attention for their look, clothing, production of accessorizes.  Men and women surely dedicated a great deal of attention to personal care as well as medicine and wellness in general, as also indicated by the many thermal baths found during archaeological excavations and the numerous images and artifacts that have reached us. 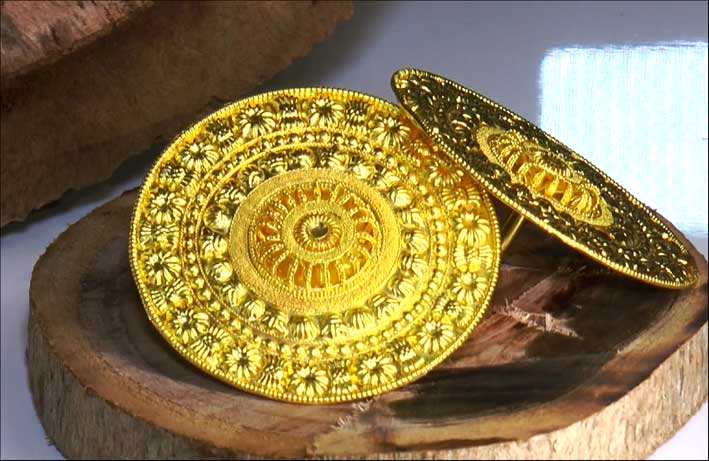 We could actually say that there was a constant research for “being well” and “being beautiful”. We can see that from the representation of naked figures, from the elegance of toilet utensils, from the refined cosmetic residues in archeological findings as well as from the surgical instruments used, including dental prostheses.

For treating diseases, of course they could only rely on natural remedies, starting with the medicinal herbs present in abundance within the floristic heritage of the “lands of Etruria”.  Etruscans were renowned pharmacologists as well as cosmetologists.

They knew the potential of  medicinal plants and did not ignore the “pharmaka” hidden in Myrth, Sage, Mint, Laurel, Rosehip, Rosemary, Lavender, Pine, Cypress, Mauve and many more plants still nowadays luxuriantly growing in Tuscany. All this is perfectly in line with the ancient (and today very modern) concept that nature is the primary source of health.

Etruscans were famous for being people of extraordinary elegance: they wore refined garments in bright colours, elaborated jewels and accessories in precious materials such as gold, amber and ivory.

Their ability as goldsmiths was known and appreciated by neighboring populations and, interestingly enough, in the land where once was their highest production of jewels, nowadays is the part of Tuscany renowned for gold processing and jeweler’s art (I am talking about Arezzo and its province)

Women had refined make-up products and used to dye hair. The most important accessory was the mirror, as evidenced by the numerous finds of this object with the most varied forms and decorations.

Cosmetics were created using pure oils and herbs and, sometimes, with the help of oriental perfumers.

Preciously decorated containers were used to store products and great attention was given also to room fragrances using odorous substances such as incense and myrrh that, burned inside trays finely decorated, spread their aromas in the homes during their everyday life.

The Tomb of the Beautiful Lady from Chiusi

I always found fascinating the finding, in Chiusi, of a tomb belonging to an aristocratic woman who lived between 150- 100 BC: Thana Presnti Plecunia Umranalisa.  Many informations have been provided thanks to the archeological discovery of the so-called Tomba della Bella Signora di Chiusi.  Thana must have been petite and slender, as indicated by her numerous tiny rings and small bracelets, with clear signs of every day usage, as shown by the wear.

The objects brought back to life have been miraculously preserved by the passing of time.

In Thana’s funeral kit (where we know it was custom to put all the things that were most important for the deceased when in life) they found a precious box finely decorated, in Latin called theca,scrinium, in Greek indicated as myrotheke, referring to myra : perfume container. It was like a modern beauty-case with numerous compartments made to store unguentaria (all thypes of balms) and important personal care items. We find among them the Latin volsellae (iron tweezers) used for hair removal, decorated combs, elegant hair pins, mirrors, jewels and an alabaster box surprisingly still containing a noticeable amount of residues of the body balm she must have used in her happy times.

Analysis of the content showed the ingredients: the unguentum/myron was made of a base of vegetable oil resulting from a mix of Olive, Almond oils and the exotic Morenga Oil, a product coming from far away, originating from Sudan and Egypt. An ingredient today very much in demand in the beauty industry for its amazing properties on ageing skin.

Different oils for each part of the body

It seems that the precious balm was very similar to those used by Egyptians who used to have different fragrances and oil combinations for the different parts of the body: a balm with Palma Oil for breast and cheeks, Bergamot and Olive oil  for the body, Marjoram oil for hair and brows, Thyme infused almond oil for neck and knees.

What else among the basic ingredients of Etruscan cosmetology? Rosehip, rose extracts, the oil obtained from grape seeds, that we now know being reach in anti-oxidants and containing powerful anti-ageing factors, marine salt from the Tyrrhenian coast (today charmingly called Costa degli Etruschi), resins from Cypress, Pine, Amber, Aromatic Herbs and Honey.

A modern start-up inspired to Etruscans

All this and a great fascination with this interesting population is the base of a joined project between Chiara’sTuscany and “Essere per te”, a small independent start-up born in Tuscany but with an international team of ladies.

In the footsteps of Etruscans…an organic beauty line inspired by the Etruscan ingredients found within the powerful magic balms of our beautiful predecessor.

The products are just the beginning of a larger project whose aim is to recover and bring back to life old beauty and health and wellness recipes linked to Tuscany and our ancestors.

Which herbs were the most used? Why? How? The interesting “Essere per te- workshops” complete the project with creative laboratories open to everybody passionate about herbs, herbalism and natural remedies.

“..may your  lover never catch you with the jars of your creams. May the art that makes you beautiful  remain secret…”