( By Mari Regoli) The Iron Baron Ghost: Even though Brolio castle is quite close to Siena, it belongs to the florentine Chianti. Therefore,  all generations of barons at Brolio were strong and trustworthy allies of Florence and the Medicis.

The most famous among the Ricasoli barons certainly is Bettino Ricasoli. 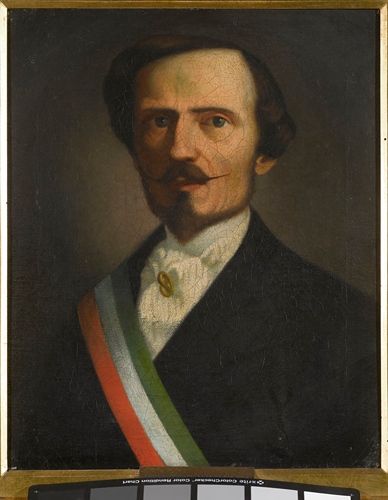 Successful in politics, he was the second Prime Minister of Regno d’Italia, the Kingdom of Italy, after Cavour. Moreover, he greatly improved the economy of the rural and poor areas around the castle, thanks to his strong and stern character, a character of still, hence the nickname of Barone di Ferro (Iron Baron). Peasants worked hard under his scrutiny and everybody appeared to fear him.

In 1880, Bettino died in his beloved castle and quite soon after, his spirit, or his ghost … started to be seen.

The ghost of the iron baron has haunted the Chianti area for almost a century. At first, it  was reported riding a white horse passing swiftly among vineyards and olive trees at night. The tale of the riding ghost of Brolio was well known not only in the nearby villages but also in Siena. Several witnesses described the nightly rides of the baron, and also his terrible tricks. Yes tricks…, in fact, after a while, the spirit became playful and tricked innocent farmers.

In the kitchen, his mocking laughter was heard while plates and pots inexplicably were smashed on the floor. In other occasions he showed up as two blazing eyes appearing in the darkness of the bedroom.

I can only  imagine the terror of the poor farmers! In the ’70s, the apparitions ceased; probably the unsettled soul of Bettino finally found peace?

In Brolio everyone were ready to swear the ghost story was true.  Many sincerely believed that the ghost of the baron rode through his properties; sometimes they almost seemed to love the idea!

I don’t believe in ghosts, but every time I visit the castle I feel as if someone, Bettino perhaps, is peering through the windows…checking on visitors.

Could it be that the Baron’s spirit is  not ready yet to leave his land?